Poetry came up in conversation with neighbours yesterday - not me, I didn't tip it that way with a nod or a wink or a timely quotation - Mary offered a Gerard Manley Hopkins' kingfisher, remembered from the lessons of an enthusiastic English teacher when she was a girl, how often the way.

If i had it by heart, which I should, I'd offer this quiet piece by the celebrated Hopkins at any time. And i'm not surprised to be reminded of it at this juncture, at a turning over of books, stones and fond conjecture, looking for inspiration. 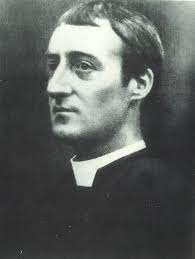 (a nun takes the veil)
I have desired to go
Where springs not fail,
To fields where flies no sharp and sided hail
And a few lilies grow.

And I have asked to be
Where no storms come,
Where the green swell is in the havens dumb,
And out of the swing of the sea.

Posted by Dominic James at 09:22 No comments:

Good poetry and strong performances in #XI of the outdoor voices at Angry Cow Poetry. A stand-out is Angie Haze's "Dance for the Seeds" at 1.07.11, once seen, undodgeable. And if i herd with the quieter ones, there is is urgency, passion and thought given voice, for the most part, and I was brought up short by the force of these pieces.  Next time:  Con brio! Like the man said. YouTube Link 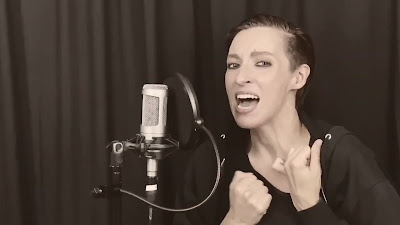 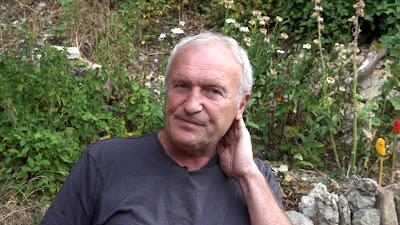 Posted by Dominic James at 09:09 No comments:

Of the wise men 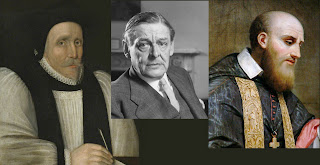 A super essay from Eliot on Lancelot Andrewes: a lesson in devotion and the discipline needed to write it out.  Anyone with an appetite for the best use and lift in writing, clear-sightedness over confusion, might learn from these notes on a stalwart of the early Anglican Church.  “Intellect and sensibility were in harmony and hence arise the particular qualities of his style.”

It is beyond me to take Andrewes' work head-on: Latin ungrasped, allusions pitched in knowledge ancient, not familiar.  But I perceive a word squeezed for its essence… [as] each new word or phrase represents a new development, he assimilates his material and advances by means of it, his quotation is not decoration or irrelevance, but the matter in which he expresses what he wants to say.  If he repeats, it is because the repetition has a real force of expression.

Andrewes tried to confine himself to the elucidation of what he considered essential in the dogma.  He was drilling down, digging in, “purifying a disturbed or cryptic lecture-note into lucid profundity.”  In this regard, and often with the constructions of his time:

For loving, and for saying so

he offers more and better than the often vague -  if intentionally so - somewhat distracted Donne. As for the rest of us, Eliot's eye sweeps the auditorium:

To persons whose minds are habituated to feed on the vague jargon of our time, when we have a vocabulary for everything and exact ideas about nothing – when a word half understood, torn from its place in some alien or half-formed science… conceals from both writer and reader the meaninglessness of a statement, when all dogma is in doubt except the dogmas of science of which we have read in the newspapers, when the language of theology itself, under the influence of an undisciplined mysticism of popular philosophy, tends to  become a language of tergiversation – Andrewes may seem pedantic and verbal.  It is only when we have saturated ourselves in his prose, followed the movement of his thought, that we find his examination of words terminating in the ecstasy of assent…

Andrewes forces a concrete presence upon us.
Of the wise men come from the East:

It was no summer progress. A cold coming they had of it at this time of the year, just the worst time of the year to take a journey, and specially a long journey in. The ways deep, the weather sharp, the days short, the sun farthest off, in solstitio brumali, ‘the very dead of winter’.

And I am prompted to return to Introduction to the Devout Life, by Francois de Sales, first suggested by Aldous Huxley in The Perennial Philosophy, and pick up again that comparable contributor to the discovery of humility's iron.

Posted by Dominic James at 11:43 No comments:

A few photos from the batch, at last Friday's summer reading by Stroud Poets at Museum in the Park. A good show, with new pamphlets out from the Yew Tree Press, a week's work under the belt of the Dialect Writers and Alun Hughes reading from Down the Heavens. 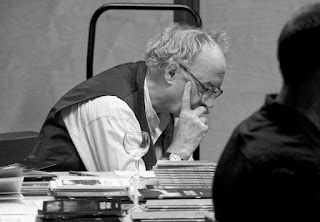 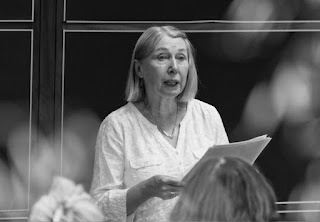 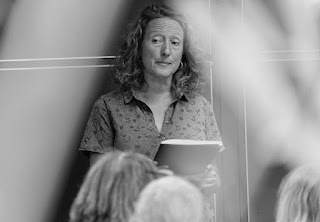 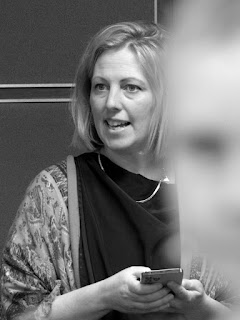 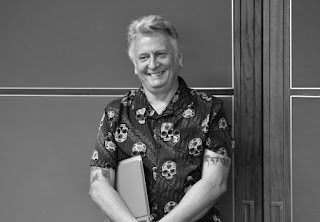 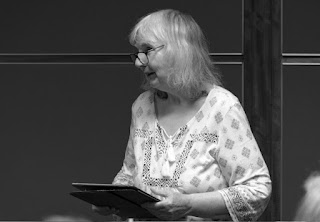 f anyone performing hasn't received photos/confirmation they're available, do get in touch - email on the me me page.
Posted by Dominic James at 08:34 No comments:

On poetry, TS Eliot explains understanding evolves from the physical effectiveness of any given poem, how it works on his senses, his emotions.  It is from this point, as one gathers or weighs the components of a piece, the work of intellect starts. And it is a relief to be reading Eliot again, a confirmation, spelling out what he instinctively knows makes a poem.

His discussion of plays shines less. Putting the play as a whole over any particular character Eliot makes the refreshing case that Hamlet is a failure.   Enjoyment of the play might trump this view, but I accept his conclusion that with Hamlet, frustrated in matching his own intense feelings to his mother’s passive self, Shakespeare tackled a problem which proved too much for him.  The whole how or why of it we can never know… we assume it to be an experience which exceeded the facts. To know why Hamlet was made to tackle problems beyond him we should have to understand things which Shakespeare did not understand himself. 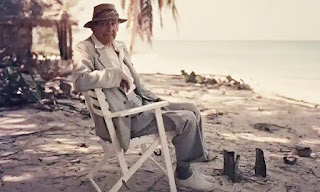 Less than madness, more than feigned: with adolescence and psychology turned over and dismissed: the levity of Hamlet, his repetition of phrase, his puns, are not part of a deliberate plan to dissimulation, but a form of emotional relief. In the character it is the buffoonery of an emotion which can find no outlet in action: in the dramatist it is the buffoonery of an emotion which he cannot express in art. And as every wit is strained to align the world with his own experience, Hamlet indeed seems Eliot’s artist, who intensifies the world to his emotions.

Isn’t it in that that the prince precisely is, or proves again to be, the mirror of the age?  Eliot is right to point out Hamlet is not so young as to unable to keep his emotions unchecked, so disturbed as to have his ghosts and uncertainties separate him entirely from that upset world where the play begins.
And I remember there is that renaissance marque of Hamlet and Yorick’s skull, even by the Elizabethan age we still had a foot entrenched in the middle ages, close to death in life and etc.

I am content the anguish, the separation, this unchecked indulgence and lack of conclusion in Shakespeare’s drawn-up struggle of wits - to the distress of family and court - is the play itself.  It comes to mind Arthur Miller, in his autobiography Timebends, records a visit by Robert Lowell and when the poet made some pronouncement on the determined rules of a playwright, adding that as Eliot said so it, must be true.  Perhaps unspoken at the time, Miller’s reaction was:  I’ll be the judge of that.

Well, I am putting aside Augustine – more patience required – Wallace Stevens –  same – Death of the Poets, by an English pair eminently sortable into type themselves – no – pleased to be back on the trail of the aesthetic and purpose of the poet.

From Tradition and the Individual Talent

“…There are many people who appreciate the expression of sincere emotion in verse, and there is a smaller number of people who can appreciate technical excellence. But very few know when there is an expression of significant emotion, emotion which has its life in the poem and not in the history of the poet.  The emotion of art is impersonal. And the poet cannot reach this impersonality without surrendering himself wholly to the work to be done.  And he is not likely to know what is to be done unless he lives in what is not merely the present, but the present moment of the past, unless he is conscious, not of what is dead, but of what is already living.”

Posted by Dominic James at 09:17 No comments:

A couple more videos conjured up this week with Stroud poets, Jacqui Stearn and Caroline Shaw.  The films were fun to make, and it is always entertaining to spend time with poets. And room for improvement – keep your hand in with the bloody gimbal is another note to self – but always something comes out of it.  Caroline’s engaging poem below.

Posted by Dominic James at 10:50 No comments: 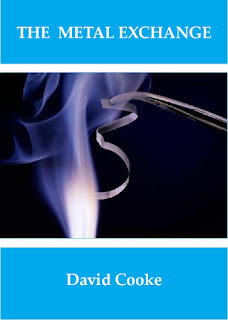 I’m just into David Cooke’s new collection, The Metal Exchange, Littoral Press, easing into that familiar certainty of rhythm, the even measure of his verse.  A forward to Neruda sets the tone.  Then into the metals, Silverado: Minted that ends so well, arm’s length appreciations of Brass and Gold, the rare earths.  At the finish of Lead, pitch perfect, “dependable and grey” I put down the book a minute:

We’ve both turned out this season in Littoral’s blue livery and David’s sent me a copy of his book to mark the occasion.  Thank you!  I would have sent him a copy of Smudge but I know, as editor of HighWindow and a prolific reader the last thing he needs is yet another book in passing.

A recommendation though, David, just in case you haven’t read it, Primo Levi’s, The Periodic Table, is a superb collection of stories that open up a lovely, lively vein of elements, of base and precious metals. If Pablo hasn’t passed that way, you have, and are free to enjoy what else has been gleaned, reflecting on metals singing underfoot. 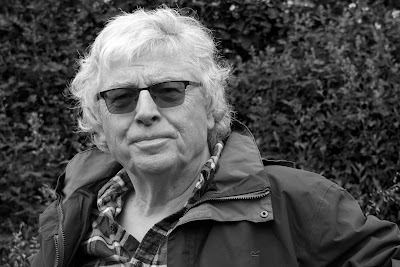 Posted by Dominic James at 13:53 No comments:

"A true collection this... each poem atmospheric, I can see why so many have appeared in magazines..."
Sam Smith The Journal May 2022

"The language of these poems is relaxed; the rhythm is crafted. Dominic James’s poems are warm and humane... "
Greg Freeman, Write Out Loud April 2022