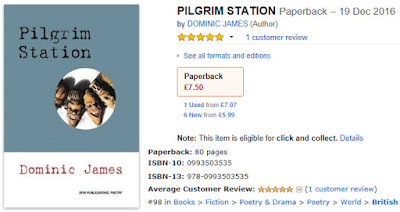 Pilgrim Station   Available direct from SPM Publications or contact me.

A poem on shoes, to theme in the first issue of the Northampton Poetry Review, July 2017.

MC at Stroud out Loud in the Subscription Rooms at the end of June, where Kai tapped a two and half inch nail into his nose, JJ brought us up to speed on Gregorian Chants and Fiona had a charming Cherokee tale of First Man, First Woman, first row and conclusion, Jim, Tim, Jeff and Kevan among others contributed to a good evening's entertainment, with Chantelle singing beautifully to finish.  On 18 July, as Bard of Hawkwood, I get a tent, or maybe a real cafe with sound system, to mount an hour's bardic show at this year's Seed Festival, link on home page, and watch the fur fly!

Meanwhile, this little wonder goes to print tomorrow, Monday 06 July, a local effort, cover by Stroud Letterpress, containing a dozen pages of poetry from the May Day bards, and one Anon. All prophets go to Hawkwood, but no profits monetarily, getting it off the ground has been a study.  Should be out next week, £1, cheap.


Half way through the collection
and it is ample, ample,
almost excessive really R.S.
is more than generous
in handing out life’s coin
and still to learn he’d more to say
and better when younger
I see he has met God in the
grounds of the mind,
in the mind’s eye. Speaking
professionally,
Thomas knew Him and no doubt
the cup of love passed back
and forth between those two
and they have had their share
of moods, which is, of course,
the common thing but, if God
is also then isn’t everyone
a Welshman? And if there is
a machine, so to speak,
God is in that too.
Published in The Cannon's Mouth #54, December 2014.

Sawdust flew and branches fell,
fast-handed down into the swell
of rushing leaves in June, where all
is wet and fresh as April.
Startled moths flew up around
the nimble feet and padded crown
of a bearded tree surgeon
poised at my bedroom window.
He climbs in rain, the sky and land, inhabiting
those inbetweens where Agamemnon,
king of men, entered in his bath house, fell.
faltered at a homecoming:
was he to one thing constant never?
One foot in sea and one on shore,
ten years gone and back from war,
from the walls of Troy sent headlong
down into the well, never to recover.
My neighbour’s buzz saw has no stealth
nor measure of its hellish din
only the nuthatch can complain
where it flits along those white remains
heaped on the ground, where long-tailed tits
had played in flights at dusk and dawn.
Something’s missing, something’s gone.
I count the generations in the dying leaves
of a mutilated silver birch, grown
too big for its roots, cut down
leaving something missing.
Poetry Bus #8  published October 2019.