Here's a shadowy coincidence.  Next week on holiday in Majorca, we will be going to Deya, Robert Graves' old haunt and now I hear, beside the naked mud pools, an artistic colony for the monied.  Graves' star is waning in my firmament, but his index of the Greek Myths and the White Goddess are on the shelf beside me.

The coincidences:  I am writing up a poem based in Brompton Cemetery that reflects on the Port of Erebus (entry to the underworld) and have just read Norman Cameron's collected poems, John Norman spent time with Graves & Co in Deya, he wrote it up in passing "A Visit to the Dead." The first stanzas quoted below.  Now looking out the poem I find Cameron was buried in the Brompton Cemetery. Occasionally the coincidences mount up. 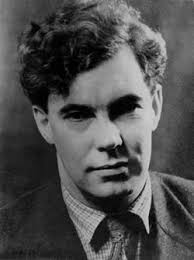 I bought  (I was too wealthy for my age)
A passage to the dead ones' habitat,
And learnt, under their tutelage,
To twitter like a bat

In imitation of their dialect.
Crudely I aped their subtle practices;
By instinct knew how to respect
Their strict observances.
Posted by Dominic James at 07:36