﻿
Self Portrait as Philologist Imbiber

Plunged again into the heart of the matter, into the heart’s red core,
by Liardet, his Self Portrait as Shamdeo – which I read as Shenandoah –


Talking to his Future Self, with sorrow and ferocity, once more, the old
antagonists. I have put waterlily and jasmine in my hair, recall

from ancient texts, we’re shaped by demons of the earth and air,

image of a god removed far from the natural order of the world,


far from oblivion and, old or young, demons to the last resent our
kindling opposites to stoke a flame, reignite the spark within


and rise above the salty realm of Yaldabaoth, Sophia’s dream.
Dust devils of our whirring words emerge from every source,

spoken funnels of an arid wind have turned among Rome’s garden,

ruined, patrolled the broken Parthenon and, genius of purpose,


skimmed across our staggered paths, lifting all beneath them.
Dust or flame raised up and held apart, in centrifugal strain


like thought’s internal conflict, as we live and breathe, press on,
avoid their minor, blinding squalls which scribble in the wind,


to recognise the generations’ words run deep, listen to them.
Ghosts of every age conclude: ragged men, have caution. 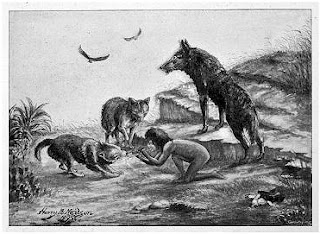 ﻿
I doubt Tim Liardet would bat an eyelid at my using a poem from his recent volume The World Before Snow as a kicking off point for this  practice piece – Chops: good for a blog that needs feeding. I was struck by Liardet’s earlier collection, The Storm House: serious and disturbing. He is an examplar of the craft.  The lines above may gradually become a kind of shallow imitation - which suits the subject matter rather well.
Posted by Dominic James at 03:44